For a love that soars the skies!

A union between two ambitious pilots is no mean feat, making it all the more challenging to push past all odds, full throttle! Chanu and Digvijay’s credit each other’s unconditional support as the fuel that makes their relationship fly high!

Chanu tells of Digvijay, “After graduating from flying school, in the four and a half years it took me to find a job, I’d lost faith in myself. But Digvijay never gave up on me and told me ‘You should be up in the sky pursuing your dreams, Chanu. Don’t let anything get you down.’ And to date, he remains my biggest motivator whenever I hit a hurdle.”

Digvijay, in turn, shares, “I started my aviation career after Chanu. The decision came with many daunting tests but she was with me through it all. I think what works for us is that we understand the struggles of our profession and don’t shy away from giving each other a helping hand.”

Despite their similar professions, the two have very different ways of unwinding – while Chanu enjoys socialising and heading out, Digvijay prefers spending time at home to relax. However, these differences don’t get in the way since the two understand that spending time with each other is what counts. It is this understanding & communicating with one another that makes their love soars the skies, it is what makes their love rare.

To mark their rare love, they chose Platinum Love Bands crafted in a metal that’s just as rare. Cocooned by love, guided by strength, a bond was formed, unshakeable through change. When you draw from each other's strengths, you become a united force. With faith, you build your paths together, crossing over obstacles, moving towards your dreams. In times unsteady you kept afloat, reaching out to each other with love & support. When troubling tides led you astray, your faith in love led both of you back ashore. To have and to hold, with hopeful tomorrows sure to unfold. One brought strength and kindness, the other courage and care, and love imbibed them all to become better than ever. No matter which way the world turns, you know how to find your way back to each other. When there were choices to make and pathways to pick, love became your guiding light. Anchored in each other you power through the storms, unafraid. Resilience kept your hearts steady, and your feet going. Hand in hand, you both carved a new path perfect for two. 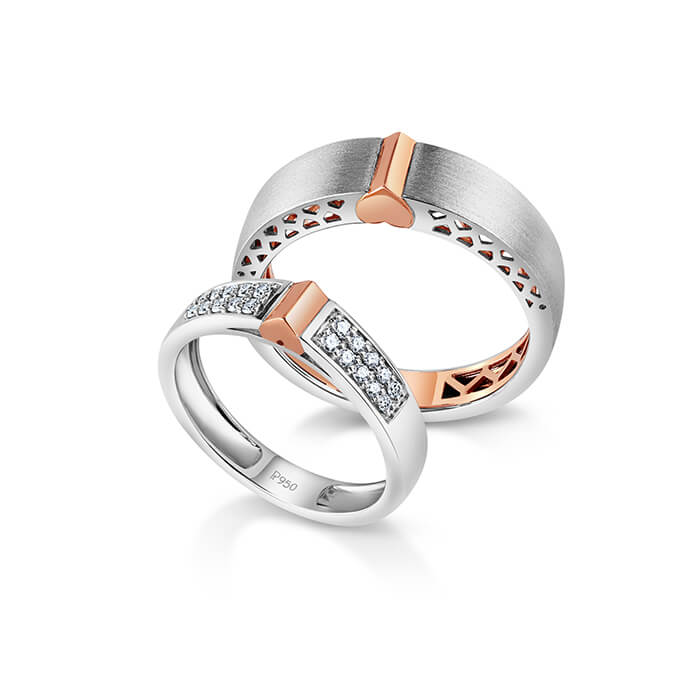 In your resilience to stand tall through it all, you saw yourselves rise in love. The Best of Us

With the strength you both found, you brought out the best in each other. When life brought you to crossroads, you met each other halfway to build your path ahead, together. Thankful for all that you are together, for your love found hope and strength in each other.

Shop Collection
Xhttps://platinumdaysoflove.com/ uses cookies to ensure you have the best experience on our website. Learn more I Accept